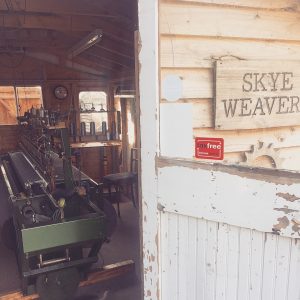 Here at Factory8 we talk a lot about the art and best practices of garment making and manufacturing, but have you ever wondered about the history and process for making the materials involved in garments?

And excellent place to look is Scotland, for the story of wool and fabric weaving is inextricably linked to the history of the Scottish Woollen Trade, which has been integral to the economic, social and technological development of the region since the middle ages.

Even though today the evolution of synthetic materials and the abundance of cheap overseas manufacturing have led to the closure of many of the original mills, the Scottish woolen industry still continues to thrive throughout the region in larger mills and smaller cooperatives alike.

One such is example is Skye Weavers, a small independent weaving and sewing business based on the Hebridean Isle of Skye (one island over from the famed weavers’ Isles of Harris and Lewis).  They have one of the most excellent supply chain stories of wool to clothe, with clear explanations and beautiful graphics.  Check it out here! https://www.skyeweavers.co.uk/story

In short, the making of fabric is and continues to be an extremely labor intensive practice.  Dyed wool fiber is converted into yarn for weaving in several stages. Firstly, the fibers are oiled to replace natural oils lost during the dyeing process and to protect the fibers during carding and spinning: different shades of fiber are then blended to achieve the required color mix by passing the fibers through a teasing machine. The next stage is carding, in which both dyed and undyed fibers are further teased and blended and finally drawn out into a continuous web of untwisted fiber, called slivers or rovings. These slivers of fiber are regular in weight and thickness but have no tensile strength. This is achieved by spinning the slivers into yarn.

Spinning is when fibers are drawn out and twisted together to make a continuous thread for weaving. Fun fact: spinning was originally the work of unmarried daughters living in poor households. It’s what the term ‘spinsters’ is based on.  Originally they worked at home, but eventually big spinning mills were set up throughout the lowlands and staffed by women and young children.

Next the yarn is ready for the weavers who used the threads created by spinners to make a variety of fabrics and materials. Originally weavers worked from home – women and children worked in their own cottages – until the Industrial Revolution when big weaving sheds were set up with power looms.

And finally the fabric was ready for finishing, or “waulking.”

There grew up a rich tradition of waulking songs in Scotland, some serious and slow for singing at the beginning and end, some quick and jolly, most of unspecified length so that they might continue until the cloth was ready for the next process. As the material softened it also shrank and the leader would measure it in finger-lengths to determine whether another song was needed. “How many songs will it take?” they asked of a piece of cloth.

No song was ever repeated, for this would bring bad luck to the workers, and offerings of milk were sometimes made to a fairy-woman, the “Ioireag”, who was believed to be present at a waulking. The process had sometimes seven stages, sometimes nine or twelve: all of which were magic numbers for the Gael.

Though fabric is now measured by the yard and not by song, even today it is apparent that the region still retains a world reputation for handcraft and skills, learned and inherited over generations, for design excellence and luxury woolens.