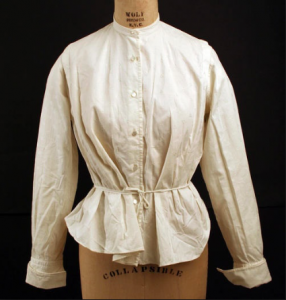 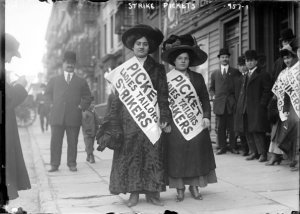 This holiday season we give thanks to all of our valued clients, but also for our vast network of vendors, collaborators, and laborers in NYC’s Garment District, and let history be a reminder that we continue to not take each other for granted.  During this time over a century ago in 1909 the New York Shirtwaist Strike was taking place in the city.  Also known as the Uprising of the 20,000, the strike was led by the International Ladies Garment Workers Union and primarily involved Jewish and Italian women working in NYC’s shirtwaist factories.  Sadly, the end of the strike was followed only a short time later by the Triangle Shirtwaist Factory Fire, which exposed the plight of immigrant women working in dangerous and difficult conditions.

The shirtwaist was a tailored blouse or shirt worn mainly by working-class women in the early years of the twentieth century. A button-down blouse, the functional shirtwaist was valued for its ready-to-wear, workplace appeal and its simple design, originally modeled on menswear shirts.
The shirtwaist had a rounded neck or tailored collar, and emphasized a fitted waist with flowing fabric below that could be tucked into skirts or left outside of them. Because the shirtwaist was primarily a working woman’s blouse, it most commonly was manufactured as ready-to-wear clothing in factories.

While the original strike of 1909 was successful in gaining improved wages, working conditions, and hours for its laborers, the devastating fire which happened soon after at Triangle Shirtwaist Factory Fire killed 146 textile workers because the owners of the factories had the exits and stairwells locked to prevent workers from taking breaks or stealing.

While it may not seem that this event, which happened over a century ago in New York City, would be relevant today — it is. It was a tragedy that opened the nation’s eyes to poor working conditions in garment factories and other workplaces, and set in motion a historic era of labor reforms.