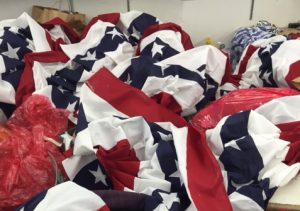 Made in America is a movement that has not only been embraced by the fashion industry, but by other manufacturers as well. New generations of companies are making higher-end products not only in clothing, but in everything from eyewear, watches and furniture. This can only beg the question whether the current movement is here to stay, and whether its current success can lead to a revival of American manufacturing on a larger scale.

The scale of garment manufacturing in the United States had already begun to dwindle since long before numerous free trade agreements were put into effect. Leading up the 1990s, many factories had already begun to downsize in response to consumers demanding cheaper products and employers resisting rising labor costs and unions. When free trade agreement NAFTA was passed in 1994, 4.5 million American jobs were lost as companies began to permanently move all manufacturing operations off shore. Companies that been using highly skilled American workers for years went to training workers overseas that had never even used an industrial sewing machine before.

However, the companies that are committed to U.S.-based manufacturing understand this and have been laying the groundwork for years now based on a new era of American manufacturing, one that is not modeled on the factories of the past, but looking towards new, innovative approaches to production that minimize waste and generate more efficiency to compete in cost and pace of their overseas counterparts. Their dedication is not to a notion nationalism, but because they believe that innovation is truly possible within the United States.

Many tech-savvy startups and high quality clothing­­ brands are choosing to manufacture stateside, and their reasons for going local have nothing to do with patriotism. They are primarily searching for better ways to create higher quality products more efficiently and deliver them faster to their customers. Competitors overseas often deal with a slew of hurdles when faced with these challenges: first off minimums are higher, which can often lead to more generic and lower quality product. Materials must also be sourced overseas, as well as all prototypes approved and developed within a long-distance process that often incurs not only costly shipments back-and-forth, but also unnecessary time delays caused by language or email misunderstandings. When working locally with vendors, companies can discuss in real time the issues and goals of their product, and also catch problems sooner as they arise in the development process, and not at the end of the supply chain after inventory has already been shipped to warehouses or even customers directly. Of course, quality comes at a price. The problem is, most Americans are now addicted to cheap products, especially when it comes to clothing.

Many companies like American Giant pride themselves on a rigorous R&D process, where each product goes through many rounds of prototyping to make sure that it is an improvement on what already exists on the market. Even if it costs more than its overseas counterpart, the idea is that it will last longer and be of higher quality. According to American Giant founder Bayard Winthrop in a recent article in Fast Company Magazine, “We’re in the business of trying to change consumer behavior. We’re not trying to bring prices down to Made in China prices, but when you consider the quality we’re offering, we think we have a very strong value proposition for the consumer. I think consumers are getting tired of buying low-end, poorly-made fast fashion: They’re disillusioned from seeing one thing after another fall apart on them.” The question remains, however, whether these companies’ products will remain niche or will appeal to a broader customer base over time, allowing them to expand their scale and workforce.