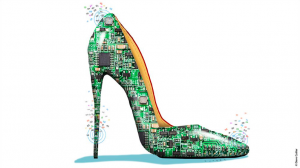 What will the future of fashion look like in a post online, direct-to-consumer landscape?  A partnership between Alphabet’s Google and Levi Strauss could be a sign of things to come–they have brought to market the $350 Commuter X, a denim jacket that lets the user control a phone through the use of gestures alone.

According to International Data Corp. analyst Ramon Llamas the coming years will see a variety of “really wacky partnerships” between fashion companies and tech specialists. At first such partnerships between tech companies like Google and fashion brands like Levi’s may have seemed odd, but in the coming years it will make more and more sense as fashion and technology become more intertwined as “Smart Clothes” become the next big thing.

Microsoft has also explored similar technological applications. Researchers previously unveiled a prototype smart scarf that users can heat up using a smartphone app, while electronics giant Samsung has a myriad of offerings, including a golf shirt that can warn wearers of the weather conditions and a solar-powered bag that can charge cellphones.

Of particular interest is the New York-based company Loomia, which started four years ago and makes flexible circuitry that can emit heat and/or light, as well as sense and track data.

Loomia has also solved one of the great challenges for the technology: creating e-textiles that are machine washable. While the details are secret intellectual property, Loomia’s breakthrough comes from the way its textile circuitry is patterned and the fact the fabric itself is a circuit. The custom insulation adds further protection.